At the foot of the Mont Ventoux, north from Avignon and towards the center of the Vaucluse department (Provence region), Carpentras is a large Provencal town with a rich natural built heritage: the agricultural landscape of the plain, the unique nature reserve of the Mont Ventoux, the limestone massif of the Dentelles…they all offer scenic roads and unspoilt wilderness trails, while the old center is full of beautiful architectural surprises!

A little HISTORY of Carpentras

On this land, the Romans planted vines and the Greeks the olive trees but in fact it was the Popes, who created a pontifical state out of the Kingdom of France, in Avignon and the Venaissin County (Comtat Venaissin), that contributed to the cultural development of Carpentras. The Venaissin County stretched from the Baronnies (in French ‘Les Baronnies’ is a historic name for the area East and North of the Mont Ventoux in Southern France) and has been for five centuries under papal administration. In 1229, the Count of Toulouse, to which belonged the Comtat, defeated the Albigensian war and ceded the Comtat to the Holy See. In 1309, the disorders in Italy encourage Popes to leave Rome and to settle in Avignon and the Venaissin County.

SAFE haven for the JEWISH population

The Popes also acquired a reputation for providing a safe haven for the Jewish population, who was persecuted in many parts of France – Carpentras was at that time a separate area that was NOT part of France – and a large Jewish population settled here, including the construction of a synagogue which is the oldest in France that is still being used for service and can be visited in the city. Despite the relative freedom, the Jews were still subject to increasing repression for centuries, forced to wear clothing that identified them separately, to live in a part of town that was closed every night, and only allowed to make a limited number of trades such as lending money and trading horses.

The city has remained wealthy for centuries, and it was only in 1791 that the “county” around Avignon and Carpentras was incorporated into the French Republic. It was also at this time that the Jews throughout France were entitled to the same rights as everyone else, and the Jewish community here widely scattered elsewhere.

When you visit Carpentras your eyes will immediately be attracted by the streets in the heart of Carpentras, where shops and homes surround the shaded squares, fountains babble, and of course there are many cafes and restaurants where you can sit and watch the world go by. So lovely on a hot summer day with a little breeze…
Friday is market day in Carpentras, the best day to visit and see the city at its liveliest ♥

Decorative art museums, heritage collection of rare and valuable books, chapels, fountains … all facets of Carpentras are unveiled at the Center for Architecture and Heritage Patrimonia which is also the starting point for tours of the city. I had the honor to be guided by a local resident, my good friend Brigitte who works at the far-famed Fromagerie Vigier and I can TRULY recommend a visit to this center! ♥

While strolling through Carpentras, one can simply not have enough eyes. Oh my! The characterful houses, the colors, magnificent skies and trees, the playful elements, all too pretty ♥

Last but NOT least, did you KNOW that…

the old center of the city is shaped as a heart ♥
some also say strawberry-shaped.
That makes it even more attractive to visit beautiful Carpentras! 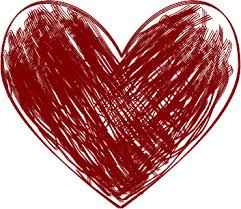